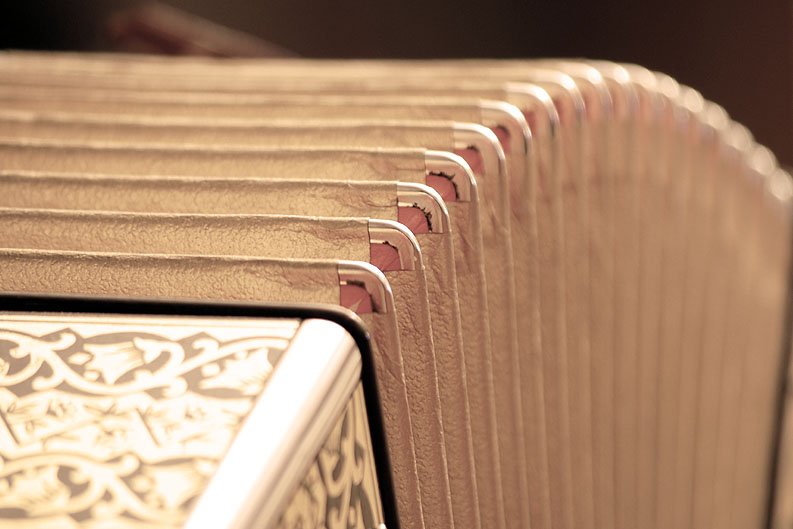 Accordion: Fill it with air in order to get warm folklore melodies.

The accordion is a relative newcomer on the music scene, having been invented in the early 1800s in Europe (drawing from the concept of older Chinese instruments) and only taking shape in its modern form later in that century. Because the accordion was able to make such a loud sound (remember, amplification hadn’t come around yet), it became quite popular, especially for dance music. There are three main styles of accordion: diatonic, chromatic and keyboard. Diatonic and chromatic accordions have buttons for keys and keyboard accordions have a piano keyboard for keys. In a standard instrument, the keys are on the player’s right-hand side of the instrument.

Accordions make noise when the bellows fill with air and this air is forced out of holes which have a small reed over them. Accordion makers tune these reeds by hand, and each note may trigger anywhere from one to four reeds… the more reeds, the more volume. The oldest name for this group of instruments is harmonika, from the Greek harmonikos, meaning harmonic, musical. Today, native versions of the name accordion are more common.

The accordion is widely spread across the world. In some countries (for example Brazil, Colombia and Mexico) it is used in popular music whereas in other regions (such as Europe, North America and other countries in South America) it tends to be more used for folk music. Nevertheless, in Europe and North America, some popular music acts also make use of the instrument. Additionally, the accordion is also used in cajun, zydeco, jazz music and in both solo and orchestra performances of classical music.