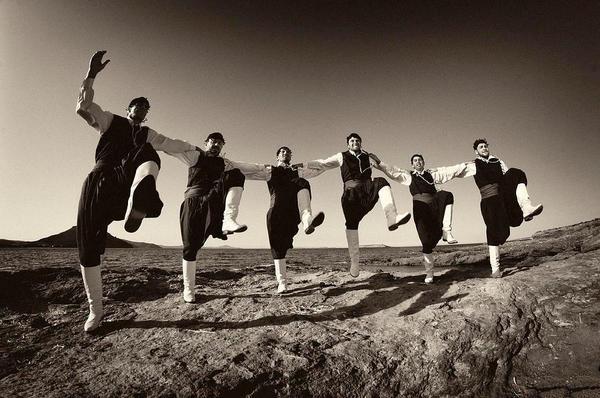 Pentozali: The tradermark folk dance of Crete through the years.

The character of Crete and the Cretans is reflected in their music and dance: Crete is one of the very few places in Greece where the traditional music heritage is growing rather than remaining static or even withering away. Contemporary Cretan dance is especially energetic, fast and characterized as warlike and aggressive. Many dances are for men only. In particular they mirror aspects of Cretan nature – the storm-tossed sea or the wild and craggy mountains. The slower dances are generally for women, and turn on the themes of marriage and love.

Pentozali is perhaps the tradermark dance of Crete – performed all over the island. It is especially lively and rapid, especially at the end. The basic steps are five in number (hence its name in part – pente=5, zales from the word to jump, with a play on the word for dizzy); based on a rhythm with 8 beats to it. You dance it with your arms on your neighbour’s shoulders, in a near circle.

The Pentozali is a vigorous dance, with high jumping movements and allows for much improvisation. It starts at a moderate pace and accelerates progressively. The dancers hold each other by the shoulders and form an incomplete circle, which rotates counterclockwise very slowly, or sometimes not at all, because most of the lively steps are semistationary. The first dancer is expected to improvise engaging in acrobatics; in this case he and the second dancer hold hands, rather than shoulders, and the second dancer stands still and rigid, so that the first dancer has a stable base on which to perform. Once the first dancer has finished his part, he is expected to break ranks and slowly dance his way to the back of the line, yielding his place to the second, and so on. Women also perform the dance, but their steps are more restrained because their dress does not allow for high jumps. Traditional Cretan menswear, on the other hand, facilitates acrobatic dancing as it includes the black βράκα vraka, a variant of breeches that are worn tight around the waist and thighs and extremely baggy and loose around the hips.