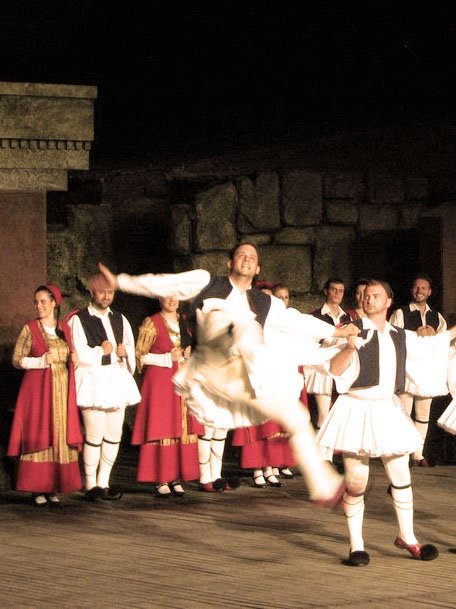 The Tsamikos or Kleftikos is a popular traditional national folk dance of Greece, done to music of 3/4 meter. This dance is usually performed to celebrate national events like in the anniversary of the declaration of the start of Greek War of Independence in 1821.

The dance follows a strict and slow tempo not emphasising on the steps, but more on the “attitude, style and grace” of the dancer. The dancers hold each other from each other’s hands, bent 90 degrees upwards at the elbows. It takes a sturdy hand, especially if you are supporting the first or last person of the line (or circle) who will lean on you to perform high acrobatic leaps (usually kicking his right leg up as he takes off followed by the left (in a scissor-like motion), hitting the latter with the back of his hand before landing).

The steps are relatively easy but have to be precise and strictly on beat. The dancer might even stomp his foot in response to a strong beat. There is some improvisation involved and many variations of the steps, depending on which area the dancers come from. Over time the dance has taken on many variations. In the past, it was danced exclusively by men, but in modern times both men and women take part.