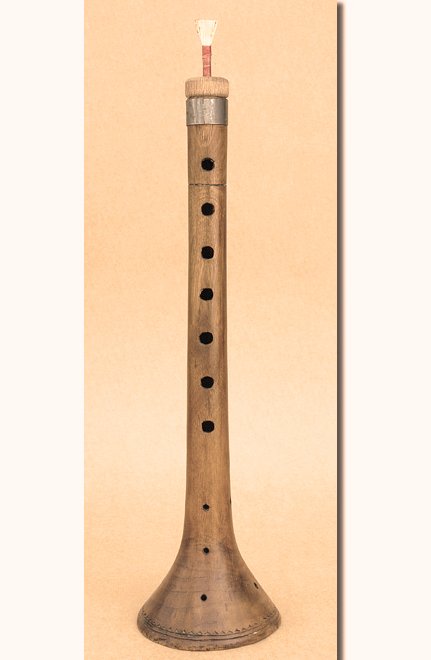 The zurna is a wind instrument played in central Eurasia, ranging from the Balkans to Central Asia. It is usually accompanied by a daouli (davul) in Anatolian folk music. The zurna is a woodwind instrument used to play Anatolian, Middle Eastern and Central Asian folk music. The zurna is a conical oboe, made from the fruit tree Apricot and uses a double reed which generates a sharp, piercing sound. Thus, it has historically been played outdoors during festive events such as weddings and holidays. It has eight holes on the front, seven of which are used while playing, and one thumbhole which provides a range of one octave.

Zurnas are also used in the folk music of the countries in the region, especially in Iran, Armenia, Israel, Afghanistan, Iraq, Assyria, Turkey, Azerbaijan, Greece, Bulgaria, Republic of Macedonia, Albania, Serbia, Bosnia, Croatia and the other Caucasian countries, and have now spread throughout China and Eastern Europe. In the Slavic nations of the Balkans it is typically called zurla (зурла). There are several different types of zurnas. They all share one and the same sound inductor—the so-called kalem—which is actually a very tight (and short) double reed, sometimes made out of wheat leaves. The longest (and lowest) is the Kaba zurna, used in northern Turkey and Bulgaria. As a rule of thumb, a zurna is conical and made of wood.