Crete is the largest island in Greece and the second biggest (after Cyprus) of the East Mediterranean.

Crete is an island with an exquisite 1,000 kilometer-long coastline dotted with numerous coves, bays and peninsulas, which afford a multitude of soft, sandy beaches along the beautifully blue Mediterranean Sea. After all, it’s among the finest in the world and has established Crete as one of Europe’s most popular holiday destinations. And, of course, the island’s historic importance in today’s world as the home of the Minoan civilization with important archeological finds at Knossos, Phaistos and Gortys, is evidenced by the tens of thousands of visitors to these sites each year.

Our previous Festivals in North, Central, South Pieria and Thessaloniki Greece had a great success as we welcomed groups and representatives of more than ten countries in each Festival. We expect that our 1st and 2nd International Festivals in Crete in 2016 will have a larger impact and will provide to the participants opportunities to learn about different cultures and people, create new friendships, exchange experiences and contacts with other folk groups. Furthermore, during their stay the participants will have the pleasure to enjoy the Greek hospitality, the crystal blue sea and a bright Greek sun.

The Municipality of Hersonissos extends from the north coastline of central Crete to the imposing mountain chains of Lasithi. It is located a few kilometers away from the international airport “Nikos Kazantzakis” of Heraklion. Within its borders there are settlements with unique characteristics and colors. Hersonissos is known as the most organized tourist destination in Crete. It is also known for its high quality hotels, conference infrastructures and the natural beauty of its coasts. Mass tourism, beautiful beaches and the rich nightlife only constitute one side of the coin “Hersonissos”. Its other side, which is less acknowledged, includes the pristine mainland, where many historical monuments and landscapes of exceptional beauty await to be discovered.

16/9/2016: Day of arrival – Check in at hotel from 01:00 p.m. – The rest of the total amount for the group, must be paid on this day – A detailed program and a person in charge will be provided to each group. Free time for rest, optional activities, explore the Island, swimming and walk to the market and clubs. – Dinner (in consultation with the hotel).

17/9/2016: Breakfast – Free day from morning till noon – Optional excursion – Midday meal (in consultation with the hotel). – Departure from hotel at 7:00 p.m. dressed in traditional costumes and transfer to the place where the show will be held. Gifts will be offered to you by the local Municipality during the performance. After the performance drinks, sandwiches and traditional sweets will be offered.

18/9/2016: Breakfast – Free day from morning till noon- Optional excursion – Midday meal (in consultation with the hotel). – Departure from hotel at 7:00 p.m. dressed in traditional costumes and transfer to the place where the show will be held. Gifts will be offered to you by the local Municipality during the performance. After the performance drinks, sandwiches and traditional sweets will be offered.

19/9/2016: Breakfast – All day free, for rest, optional activities, shopping – swimming at the beach. Dinner(in consultation with the hotel). Optional Party (Glenti) at 09:00 p.m. for all the groups with traditional Greek and European music and dances (Greek wine, traditional sweets and fruits)

The participation fee DOES NOT cover: 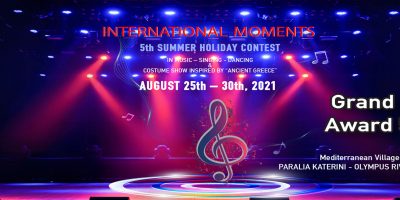