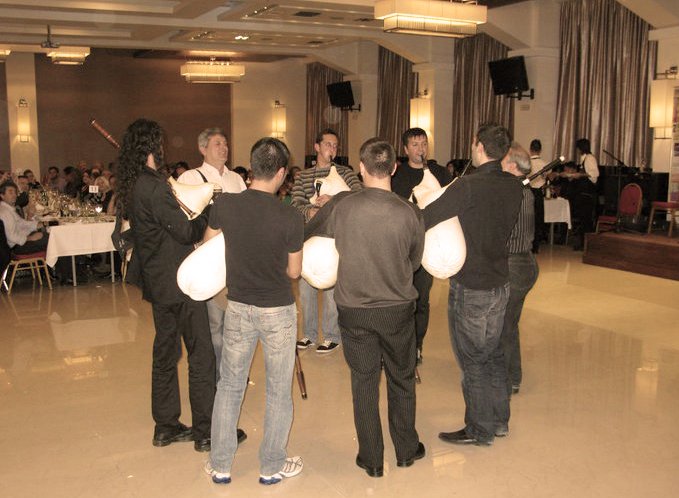 It was the third consecutive year for Cultural & Folklore Society of Trikala Imathias (Anatoliki Romilia) and its spectacular 3rd International Bagpipe Festival of Northern Greece which took place between the 20th and 21th of August 2011.

The majority of young and old people of Trikala Imathias attended the lecture of Mr. Charis Sarris “Discovering Bagpipe” during the first day of the Festival (6pm – Saturday) in order to get wider knowledge concerning the ancient folklore musical instruments and especially bagpipe.

At the same moment, Mr. Tzikas and Mr. Tsionis from the Interactive Museam of Tradition offered creative activities to young children. Our young friends had the opportunity to experience with fascinating games which most of us thought that were forgotten but afterwhile we all remembered the simplicity of these games during our childhood!

Throughout the duration of the Bagpipe Festival, in the courtyard of the Gymnasium, the attendees had the lucky chance to enhance their knowledge about the traditional items and natural products by folk professionals from all over Greece, such as traditional costumes, jewelery, bagpipes, wine, raki as well as honey.

The final whistle of the parade was stated at 9pm on Saturday, a long parade which started from the Old Square of Trikala Imathias. More than 45 bagpipers from various parts of Greece flooded the place of Festival as they were accompanied by the Folklore Dancing Group of Thessaloniki, the “Eastern Rumelia” Pella and “Black Sea” Korinos groups as well. The main presentation of the event curated by Mrs. Maria Lada and the organization of the Festival was held by ProPantos Folklore Event Center, known also as FolkWay.

The whole Bagpipe Festival ceremony was covered and broadcasted live online by FolkChannel.gr, while there was also a live coverage link of the main site of this festival via Skype with the Grand Monastery of Fthiotida, whose inhabitants had a common origin with the residents of Trikala Imathias. They exchanged greetings, wished good luck to each others and we had fun with them through this live broadcast.

Moreover, the 3rd International Bagpipe Festival was followed by a traditional feast (glenti) which lasted until the very early hours of the next day. There were more than 3.000 attendees during the two festival days, including local officials and institutions as well as foreign lovers of Greek tradition. The final festival lecture was held by Mr. Giannis Prantsidis – Assistant Professor of Physical Education in Aristotle University of Thessaloniki along side a traditional workshop of traditional dances from the region of Eastern Rumelia.